Libraries hold a special place in communities. The Carnegie Library, in Dun Laoghaire, which opened in 1912 served the community for almost exactly 100 years. Construction commenced on the new DLR LexIcon Library in 2012, and it opened in 2014. The advent of the internet coincided with the relocation of the library, and means that in some way this building is synonymous with books, whereas newer libraries encompass computers and other no less important mediums of knowledge. In a way, though, this building has a paper dimension.

We are working with Blackwood Associates Conservation Architects and Bracegrade Contractors on the Roof Lantern of the Carnegie Library. Our client is Dun Laoghaire Rathdown County Council [DLRCoCo]

The Architects responsible for the building were O’CALLAGHAN & WEBB. The following is from the Dictionary of Irish Architects – Architectural partnership of Dublin, formed between LUCIUS O’CALLAGHAN   and JAMES HENRY WEBB   on 31 August 1908.(1) Eleven years later, on 30 August 1919, LOUIS FRANCIS GIRON   also became a partner, although the practice continued to be known simply as O’Callaghan & Webb. Webb left to practise on his own on 31 August 1931, after which the name of the practice changed to O’CALLAGHAN & GIRON  . As reflected in the pages of the Irish Builder, the work of the practice appears to have been primarily commercial and domestic. O’Callaghan was said to have enjoyed architectural competitions because they allowed ‘more elbow room than is usually associated with ordinary commissions’,(2) and the partners entered several in the decade 1909-19. They were placed second in the Tralee Carnegie library competition in 1909 (which was eventually built to their design) and won the Dun Laoghaire Carnegie library competition the following year. Other competitions included University College, Dublin (1912), the Municipal Buildings, Dublin (1913), Louth County Hall, Dundalk (1915), and the National University offices, Dublin, (1918). In 1919 they, together with Giron, were awarded second prize in Part 1, Section A, of the Local Government Board’s housing competition with a design for industrial dwellings.(3) They exhibited only two designs at the Royal Hibernian Academy, both in 1909; these were for the entrance to the diocesan college at Mullingar and for Ponsonby’s premises at 116 Grafton Street.(4) Pupils and assistants in the office included WILLIAM SEDGWICK KEATINGE.

Designed by O’Callaghan and Webb and opened in 1912, the Carnegie library in Dún Laoghaire (formerly Kingstown) is both larger and executed in a different architectural style to that of the other libraries in the County. It was designed as part of an architectural competition and interestingly it was built as per the plan apart from changes to the proposed Baroque entrance which were executed in a Classical style. O’Callaghan and Webb also designed the Carnegie library in Tralee, Co. Kerry which share similar architectural characteristics. Both buildings compare stylistically to the Carnegie Libraries in America.

Kingstown Town Commissioners were among the first to adopt the 1855 Public Libraries Act. In May 1884, a meeting was held in Kingstown Town Hall for the purpose of adopting the provisions of the 1855 Public Libraries Act and for having it applied to the township. The resolution was carried by a majority of 20 to 4. Over the next thirty years, the library service was to be located in three different venues, in the Town Hall, beside the Technical School at the corner of Eblana Avenue and Sussex Street and finally in the new purpose built Carnegie Library on Lower George’s Street.

Our task is to conserve and repair the curved roof lantern from the hall of the library. The works are part of the overall roofing contract that is being overseen by Bracegrade, and which entails the total overhauling and thermal upgrade of the roof.

The curved lantern appears to form part of the Baroque entrance as mentioned above, even though the actual entrance was given a more Classical style.

We first surveyed the roof in October 2018 to prepare an outline methodology, and then visited the site in May 2019 to carry out a more in-depth survey. Works commenced in February 2020.

Description of the Roof Lantern 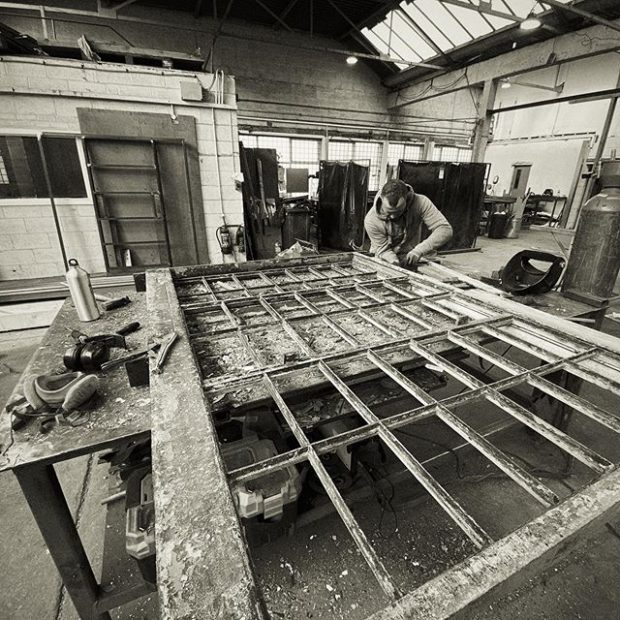 We are conserving cast iron sash windows. The first we have ever seen. They come from Grangegorman.

We have never come across this type of sliding cast iron window where the sashes are counterbalanced off each other. Thus, when one is lifted up the other drops down.

Cast iron windows had a brief period of use, mainly in industrial and commercial uses.

Grangegorman is in the North Inner City, just over 1km from the City Centre. It has a long history in serving the people of Dublin since the establishment of the Houses of Industry for the poor in the 1770’s.  In 1810 the Governors of the House decided to build a separate institution to house mentally ill patients.

The Richmond Asylum was opened to patients in 1814 and was designed by Francis Johnston, the foremost architect of the day. This building, now known as the Lower House, was built as a large quadrangle but only its southern range remains standing today.

The Richmond General Penitentiary was built nearby, also to the designs of Francis Johnston. The building was completed in 1816, five years before the first national penitentiary in England was opened at Millbank. In plan it was an extended semi-octagonal shape measuring 630 feet by 312 feet. The prison was divided in two halves segregating the sexes. Each half was further divided into three distinct wedge-shaped portions. Over time this ceased to be a prison and became part of the asylum. Only the front range and central spine remain today.

Throughout the 19th century the site evolved and grew to become a large regional mental hospital occupying over 30 hectares of land. Additional buildings were constructed stretching to the west of the original establishment. Francis Johnston left his practice to a nephew, W Murray, whose practice and descendants continued to work on the site throughout the 19th century. Fortunately much of the early work of this practice was donated to the national collections and is available in the Irish Architectural Archives.

At its peak the hospital served over 2000 patients. In the 20th century changes in care of the mentally ill had moved away from large institutions, which resulted in the gradual decanting and downsizing of institutions such as St. Brendan’s Hospital. When it finally closed its doors in May 2013 there were less than 60 patients in the old hospital. Its replacement, the new state of the art Phoenix Care Centre has 54 beds.

1984 – Government Document (Planning for the Future)

2005 – Steady reduction on phased basis to under 100 patients

This information was taken from: http://ggda.ie/grangegorman/a-brief-history